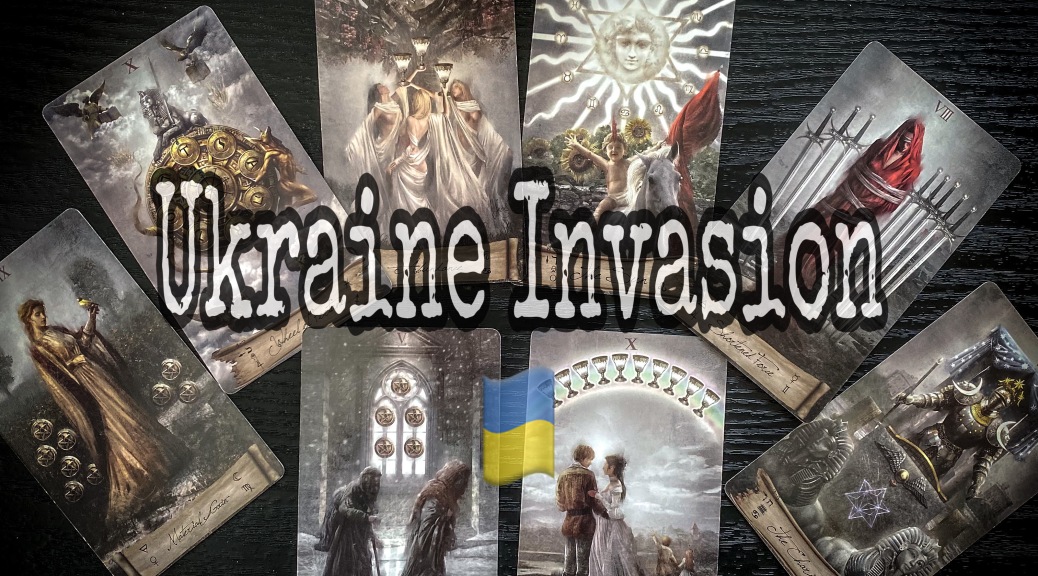 What can we expect this week? Nine of Pentacles

This card could suggest that Ukraine will gain more support from other countries and we have already seen this week citizens from all over the world, donating to help Ukrainian refugees and citizen based resistance. This card echos the abundance in resources that are being offered to Ukraine and definitely signals unity, hard work, stability, and security which suggests that other governments may soon get involved.

What is the outcome of this war? Wheel of Fortune

— The invasion in Ukraine may signal a new cycle for the world as a whole and while there may be ups and downs, we are on a karmic path to ascension and perhaps unity.

What does the future hold for Ukraine? Three of Cups reversed

This card indicates that Ukraine may be withdrawn from society and they may experience un fulfillment. There is a sadness surrounding this card and perhaps a loss in culture and celebration. This could indicate that Russia will indeed take over Ukraine or destroy it in the process, leaving Ukrainians with nothing to go back to and a disconnect from their culture.

What does the future hold for Russia? The Sun reversed

The Sun reversed indicates a dark time for Russia; chaos; spinning out of control. Continued oppression. This can also indicate that Putin is so arrogant and optimistic that he will not see that he is actually writing his own failure.

What does the future hold for Putin? The Tower reversed

This card indicates that Putin may try to clench onto his empire though he knows that he cannot succeed. This card predicts his impending collapse in power but signals that he will not let go easily.

Will the US become involved in this war? The Chariot

This is a pretty strong indication that the U.S. will become involved with the war in some capacity — it may also be swift and precise.

Will we win the fight against Russia? Five of Pentacles reversed

Is this the beginning of world war 3? Ten of cups reversed

Generally, this is not a great omen as it represents disharmony, conflict, arguments, and poverty. We may well be looking at the beginning of world war 3 with major countries around the world involved.

In case you missed it this week on my socials.

To donate to Oleg and help Ukranians survive and fight, please donate here and I will transfer directly to his daughter, Anna. There are many organizations out there that are offering aid to Ukraine right now but I have personally donated directly to Oleg’s mission as I know that it is going directly towards Ukrainian aid as well as the resistance. Just this week they have bought a surplus of medication and tactical gear that Oleg is helping to distribute from the Polish border.